Sow Something for Summer

The languid, light-filled summer days may seem a distance off, but day length is increasing and there is lots of growing getting underway in the garden all ready. Spring is a chaos, a rush of energy, and often there is so much happening its easy to forget to think ahead. If you can spare a moment, now is the perfect time to take note of spring flowering bulbs you have been admiring and make a record of combinations you want to try for planting next autumn. 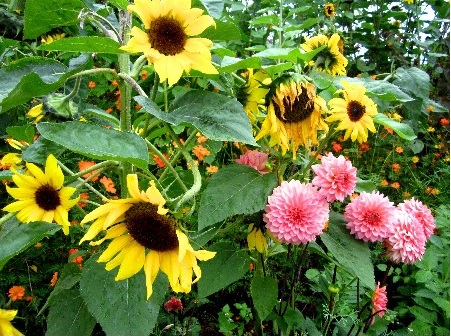 An exuberant summer border created using a mixture of annuals and tender perennials with sunflowers, dahlias and sulphur cosmos

Another spring gardening task is sowing seed for use in summer borders and containers. Sure, there are always the ready grown options at your local garden centre, where you can find a variety of jolly colourful bedding plants. But it does seem year in year out there is little variation on what is on offer. For the cost of a packet of seeds you can add a little more individuality and creativity to your to your borders this summer by filling gaps and bedding out with plants you have grown yourself, many which can still be sown now. Playing with combinations of colours and textures is a fun creative process and there is no right or wrong when it comes to personal taste.

Hardy and half-hardy annuals will flower in the year they are sown and as such are useful for creating colourful ephemeral displays. There are a huge variety of which to choose from, all it really depends on is what colours, textures and styles you like. Lagurus ovatus, also know as Bunny’s Tails Grass is a hardy annual, its easy to grow and versatile to use. It has soft downy flower heads which dance on slender stems that are held well above its strap-like verdant foliage. They playfully nod and wave in the wind and can be used in the front to middle of a border, they also look delightful in containers and make great cut flowers. 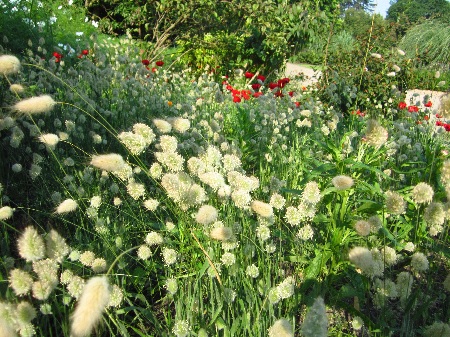 Cosmos sulphureus is another favourite of mine, it is a half hardy annual, meaning it needs a little protection after sowing until the chance of frost passes. It flowers on branching wiry stems and it can weave in and out amongst the front to mid of the border quite effectively. I once admired it in a flamboyant annual planting scheme with sunflowers, zinnias, marigolds and other citrus coloured plants, the effect was wonderfully like being surrounded by marmalade. I particularly like the cultivar ‘Bright Lights’ as one packet produces a variety of hues in yellow, orange and red.

Another option is to annually grow tender perennial plants from warmer climates, many of which are grown for their foliage alone. In a sheltered position the dramatic castor oil plant can grow well over 6ft in a summer. It has large palmate leaves and flowering panicles followed by spiny fruitlets. Castor oil plant comes in a variety of cultivars, with colours ranging from greens to purples and reds, so look for one which suits your needs.

A plant which I am growing this year and which you might just have time to sow (if you get quick germination) is the Cup and Saucer Vine (Cobaea scandens). It hails from the much warmer climes of Mexico, where it is woody perennial climber. It grows so quickly and flowers so well that it can be sown as an annual in our more temperate climate. The species produces voluptuous bell-shaped flowers in purple from August and continues until the first frosts. Alternatively there is the cultivar ‘Alba’ which has demure greenish white flowers. I am growing it in both the purple and white forms to cover a few panels of tall lapboard fence and its flowering should follow on nicely from the autumn sown sweet peas also sown there. Along the fence I also have some herb fennel, flowering parsnips and a pale lemon coloured sunflower ‘Vanilla Ice’ and I probably need a few more things in there yet, ah summer dreaming!

The plants mentioned here are but a few suggestions, browsing seed catalogues can help you find many more ideas of plants you might ’need’ for making marvellous and unique creations in your garden. But time is of the essence, and now is the moment!

Rohanna Heyes, with her husband, Michael Evans designed and built the acclaimed ‘Nourishment’ feature garden at last year's Allianz Garden Show Ireland. Rohanna has a background in horticulture with experience in designing, working in public gardens, creating horticultural displays, and has worked at both the Chelsea Flower Show and Hampton Court. As well as these experiences Rohanna has written horticultural content for the Royal Horticultural Society and other gardening websites and had photography published alongside. Currently pre-occupied with having a new baby and chasing a toddler, there is still plenty of gardening to be done with designing and making the garden at their new house and teaching Grace, two, about wiggly worms and mud pies.

Antrim Castle Gardens will be all abuzz from 6th - 8th May 2016 as the Garden Show returns to the venue for a three day festival of flowers, food and fun.